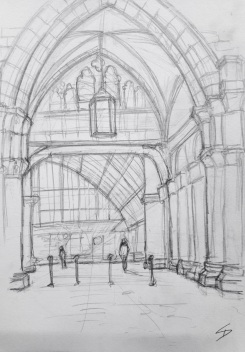 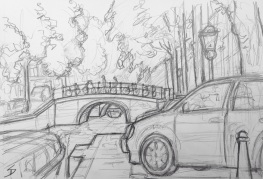 Urban Art ‘Leliegracht, Amsterdam.’ Near Anne Frank’s house. The museum is worth a visit. 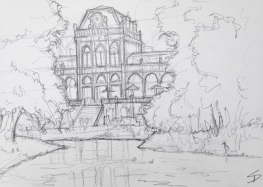 Urban Art ‘Auf Dem Rothenberg, Cologne, Germany.’ A short walk from the Lindt chocolate museum – not enough free chocolate, but it has a decent cafe. 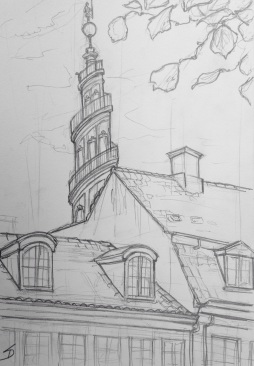 Urban Art ‘Kastellet, Copenhagen, Denmark.’ It sits in the park grounds of an army fort, near the Little Mermaid statue. While drawing this, I got told not to sit on the grass by an armed soldier.

Urban Art ‘Lustgarten, Berlin, Germany.’ I drew this early in the morning, and the marathon was on, so the streets were empty.

Urban Art ‘Memorial to the Murdered Jews of Europe, Berlin.’ There’s a museum beneath it – has very moving exhibits.

Urban Art ‘East Side Gallery, Berlin, Germany.’ A section of the Berlin Wall, with artwork on both sides.

Urban Art ‘Via Saragozza, Bologna, Italy.’ The longest stretch of porticoes in the world. It’s popular with joggers.

Urban Art ‘Fondamenta Rezzonico, Venice, Italy.’ It was chucking it down. So I took shelter in a museum cafe to draw this.

Urban Art ‘Ponte Tre Ponti, Venice, Italy.’ Drawn from a cafe, after a long search for a view with decent shelter from the rain.

Urban Art ‘Calle del Dose da Ponte, Venice, Italy.’ It was still raining. So to draw this picture, I stood under a tiny archway. 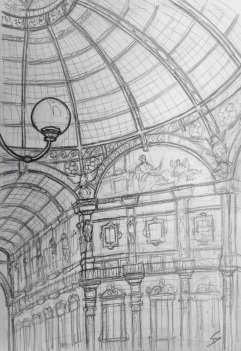 Urban Art ‘Uffizi Gallery, Florence, Italy.’ View from the Uffizi Gallery cafe. Massive queues to get in the gallery.

Urban Art ‘Arch of Titus, The Forum, Rome, Italy.’ Just up the hill from the Curia, where Caesar was murdered.

Urban Art ‘The Pantheon, Rome, Italy.’ View of the dome from inside. Amazing to think it’s almost 2000 years old.

Urban Art ‘The Colosseum, Rome, Italy.’ View of the Amphitheatre from inside. 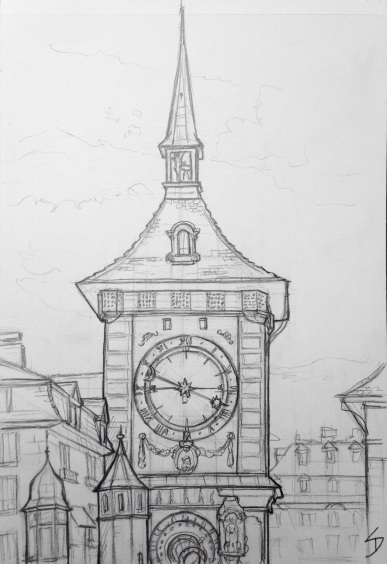 Urban Art ‘The Zytglogge clock tower, Bern, Switzerland.’ It has both a normal and an astronomical clock. It’s also just a few feet away from an amazing chocolate store. 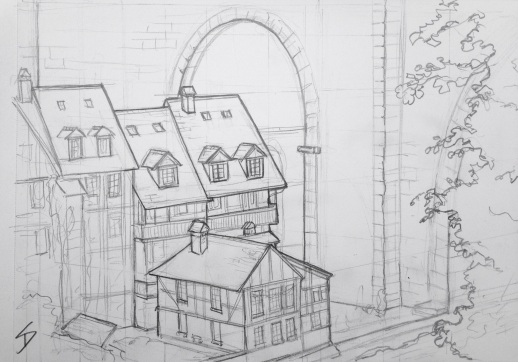 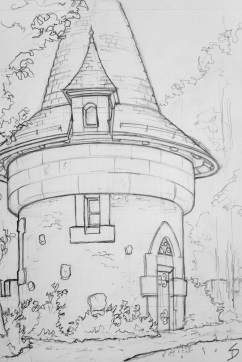